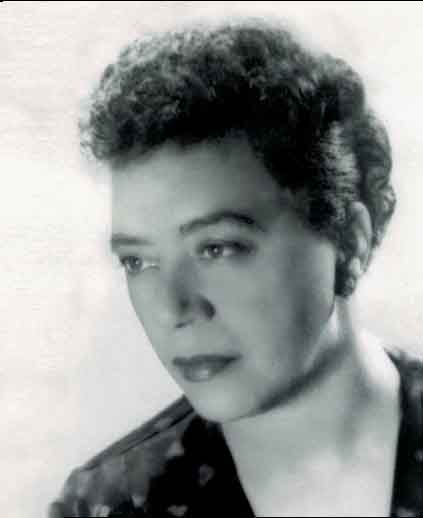 Mabel Mercer — arguably the supreme cabaret artist of the twentieth century — was born in England and performed in the United States, Britain, and across Europe to a large fan base including such big names as Frank Sinatra and Ernest Hemingway. She was a featured performer at Chez Bricktop in Paris, performed Le Ruban Bleu, Tony’s, the RSVP, the Carlyle, and the St Regis Hotel in New York, and eventually hosted her own room, the Byline club.

Mabel Mercer was born in 1900 in Staffordshire, England. After leaving a Manchester convent school at the age of fourteen, Miss Mercer joined her aunt in a vaudeville and music hall tour of Britain and the Continent. Her career quickly blossomed, and by the 1930s she was the toast of Paris, introducing her inimitable style of singing to adoring audiences and beguiling such steadfast admirers as Ernest Hemingway, Gertrude Stein, F. Scott Fitzgerald, Cole Porter, and the Prince of Wales.

The outbreak of World War II brought her to America where she began a series of engagements at New York’s finest supper clubs. Among the rooms she made her own were Le Ruban Bleu (a six-month stay), Tony’s (seven years), the RSVP (two years), and five years in her own Byline Club. Miss Mercer solidified her career with engagements at the Carlyle and St. Regis Hotels, and she enjoyed brilliant concert triumphs and record-breaking appearances across the United States.

...a living testament to the artfulness of the American song

The brilliance of Miss Mercer’s recordings have made both original albums and numerous reissues highly prized collectors’ items. To honor her 75th birthday in 1975, Atlantic Records assembled four classic early LPs and reissued them in a boxed set. In recognition of her life’s achievement, Stereo Review Magazine presented Miss Mercer with its first Award of Merit for “outstanding contributions to the quality of American musical life.” In 1984, the Award of Merit was officially renamed the Mabel Mercer Award. After an absence of 41 years, Miss Mercer made her long-awaited return to England on July 4, 1977, accompanied by her long-time friend and publicist, Donald Smith. So great was the public acclaim on her return to London that the BBC filmed three evenings of extraordinary footage of Miss Mercer’s performances. The BBC later devoted an entire week to a series of late-night half-hour television broadcasts—an honor never before bestowed upon an entertainer. In 1978, Miss Mercer’s new album, Midnight at Mabel Mercer’s, was hailed by Stereo Review as one of the best recordings of the past twenty years. To celebrate her 78th birthday later that year, Miss Mercer played a sold-out engagement at San Francisco’s Club Mocambo to enthusiastic audiences. Mabel Mercer was honored in January 1981 by the Whitney Museum of American Art in New York with An American Cabaret, the first musical celebration of its kind in the museum’s history. Created and produced by Donald Smith, the evening was dedicated to the artistry of Mabel Mercer. Miss Mercer next appeared as the first guest on Eileen Farrell’s new National Public Radio program featuring great popular singers, a program that was repeated in June 1992 at the Kool Jazz Festival.

In 1983, President Ronald Reagan presented Mabel Mercer with the Presidential Medal of Freedom at a White House ceremony. In bestowing America’s highest civilian honor upon Miss Mercer, the president described her as “a singer’s singer” and “a living testament to the artfulness of the American song.” Among Miss Mercer’s many other honors are two honorary Doctor of Music degrees from Boston’s Berklee College of Music and the New England Conservatory of Music. Mabel Mercer died on April 20, 1984. On Miss Mercer’s birthday the following year, February 3, 1985, The Mabel Mercer Foundation was formally established.